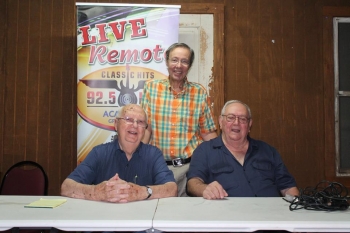 Posted about six months ago by Mark Layne

The Ville Platte Rotary Club today (Tuesday) heard from two guest speakers representing Cameron in Ville Platte. Abby Landreneau and Jared Blanchard spoke about what is going at Cameron/Schlumberger. Abby Landreneau began her presentation with a video clip produced by an employee giving a history of the Ville Platte facility. Cameron opened at the Ward One Industrial park in 1983. In 2015, the plant was purchased by Schlumberger. The facility manufactures valves for the oil and gas industry ranging in size from 2 inch to 42 inch. There are currently 310 employees working at Cameron. In 2019, 59 percent of the workforce lived in Evangeline Parish. The plant produced 11 million dollars in sales for Evangeline Parish and paid 1.5 million dollars in taxes to the parish. She reported on the numerous community outreach projects they do every year including: the annual children's Christmas party for hardship students, giving tours to school students and assisting with the special Olympics. Blanchard reported that the TC Energy Trans Canada Louisiana Express Pipeline from Appalachia to Louisiana will add three compressor stations in the state. One of those stations will be located in the St. Landry area near Chicot Park in Evangeline Parish. All of the control valves being used in this project are being manufactured at the Ville Platte facility. The facility is known for building the "Cadillac" of ball valves in the oil and gas industry known as the "Cameron Valve"that are shipped world wide. The cost of a 2 inch valve is $2000 while the huge 42 inch size value has a price tag of $130,000. Landreneau, in an answer to a question from a club member, said market conditions may change but she did not expect any additional personnel layoffs. In other club business, the rotary club approved the appointment of Bob Manuel to the board replacing Dr. Jerry Veillon who has retired. Bob joins the rest of the board: Annette Johnson, Larry Lachney, Dr. Joey Soileau, Wayne Vidrine and Nicole Wenger. Ville Platte Mayor Jennifer Vidrine announced she will be meeting with Suddenlink and Centurylink officials soon to encourage the companies to improve their internet service to Ville Platte. She will also talk with Suddenlink about putting KVPI back on KVPI on cable lineup.
Read All